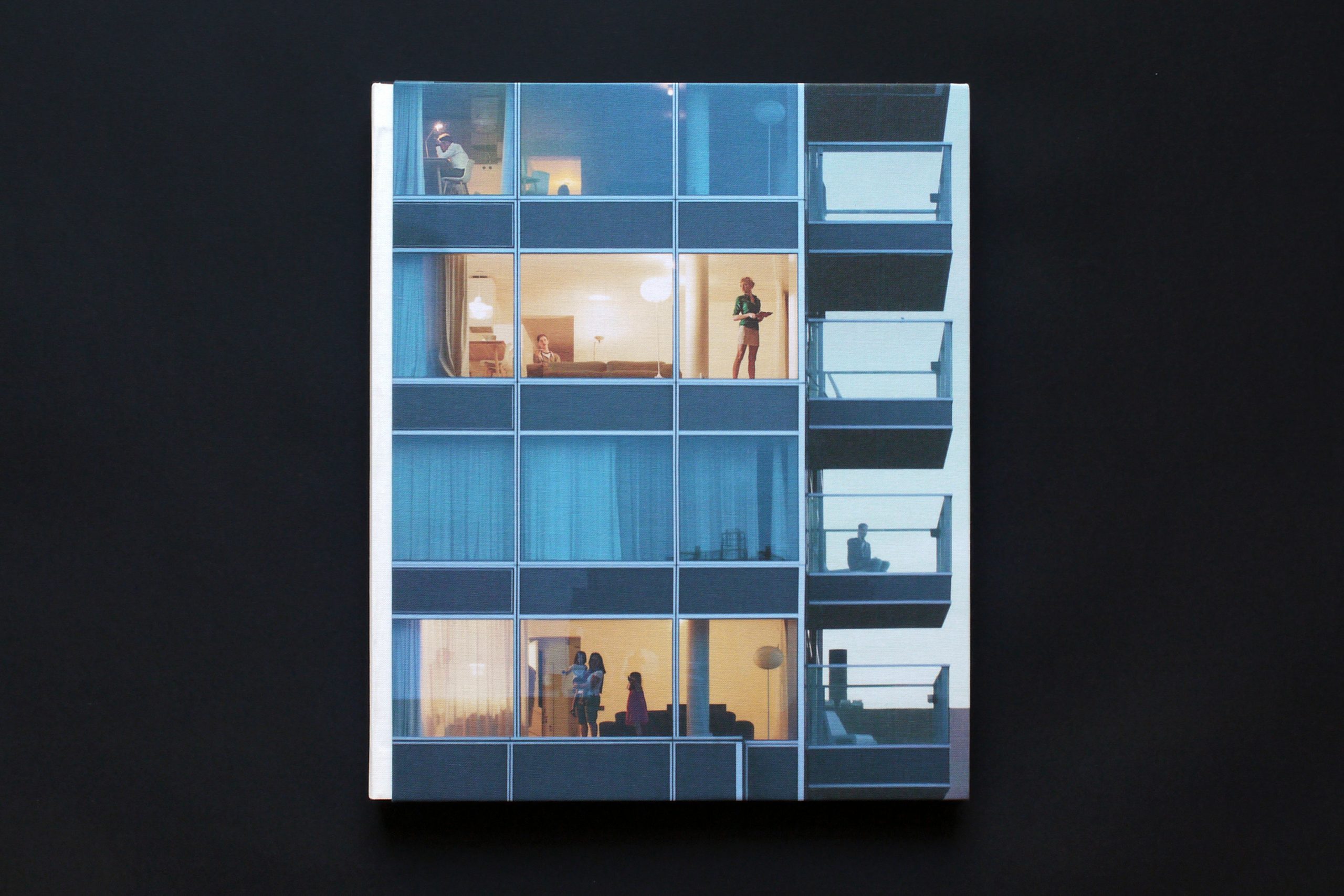 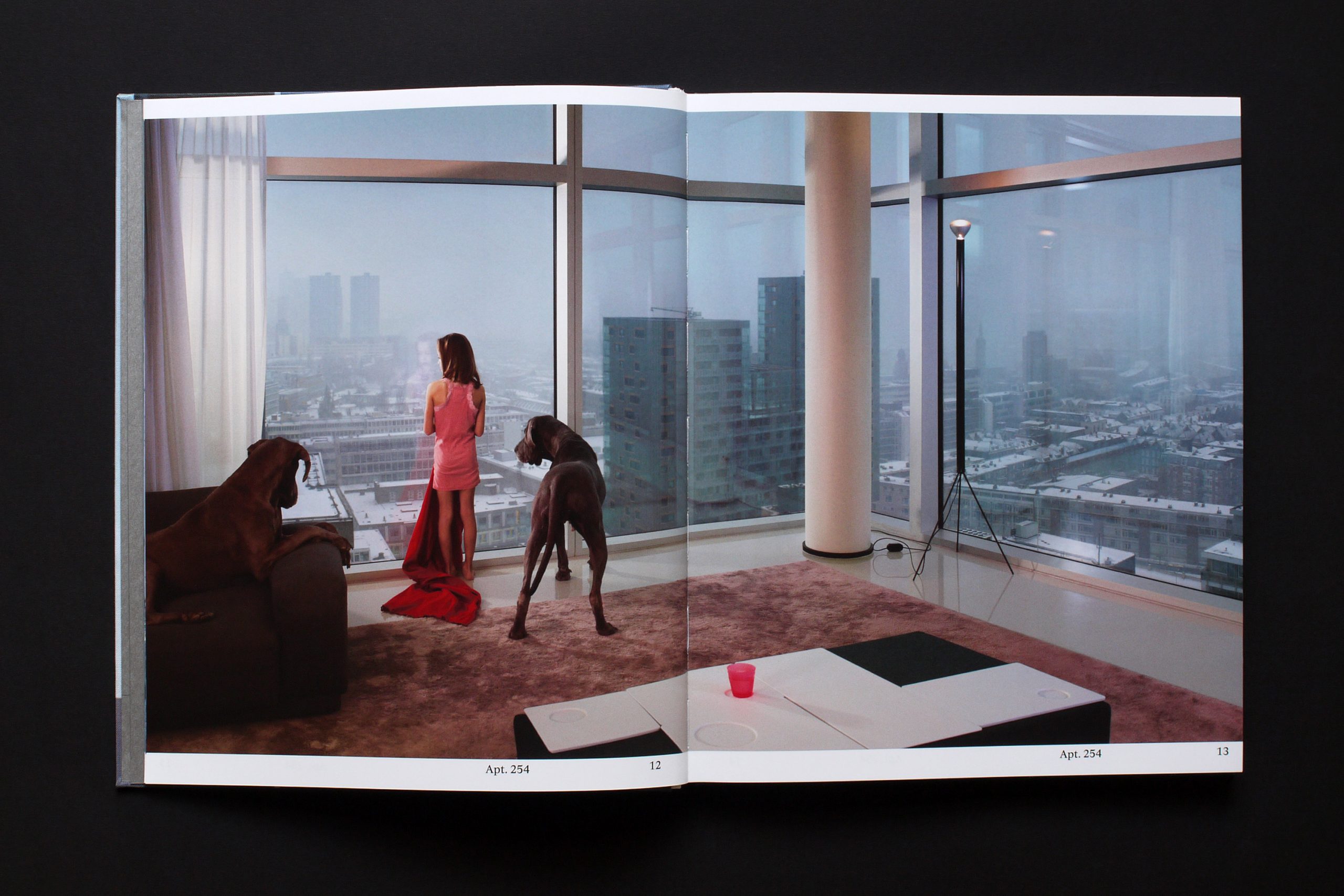 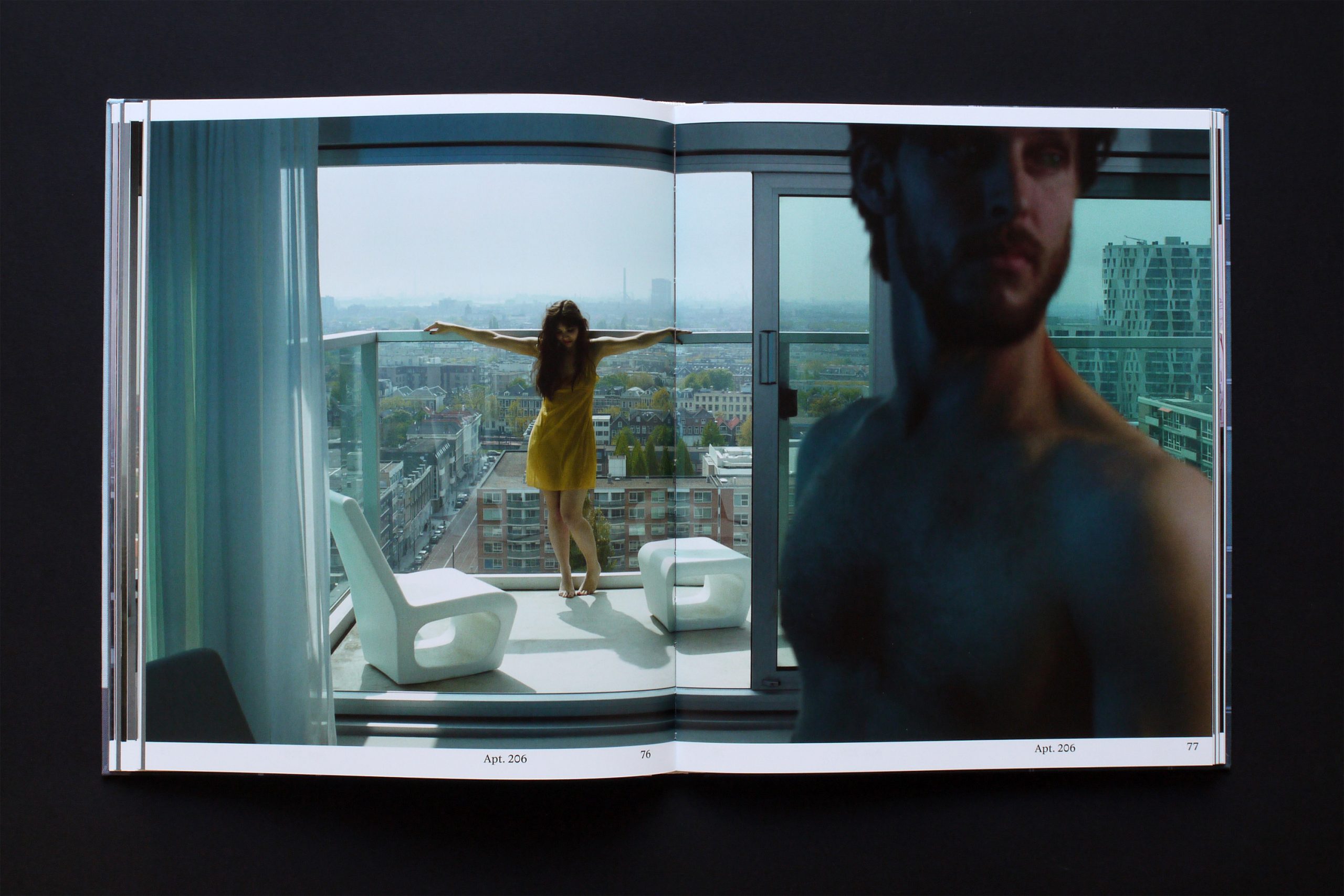 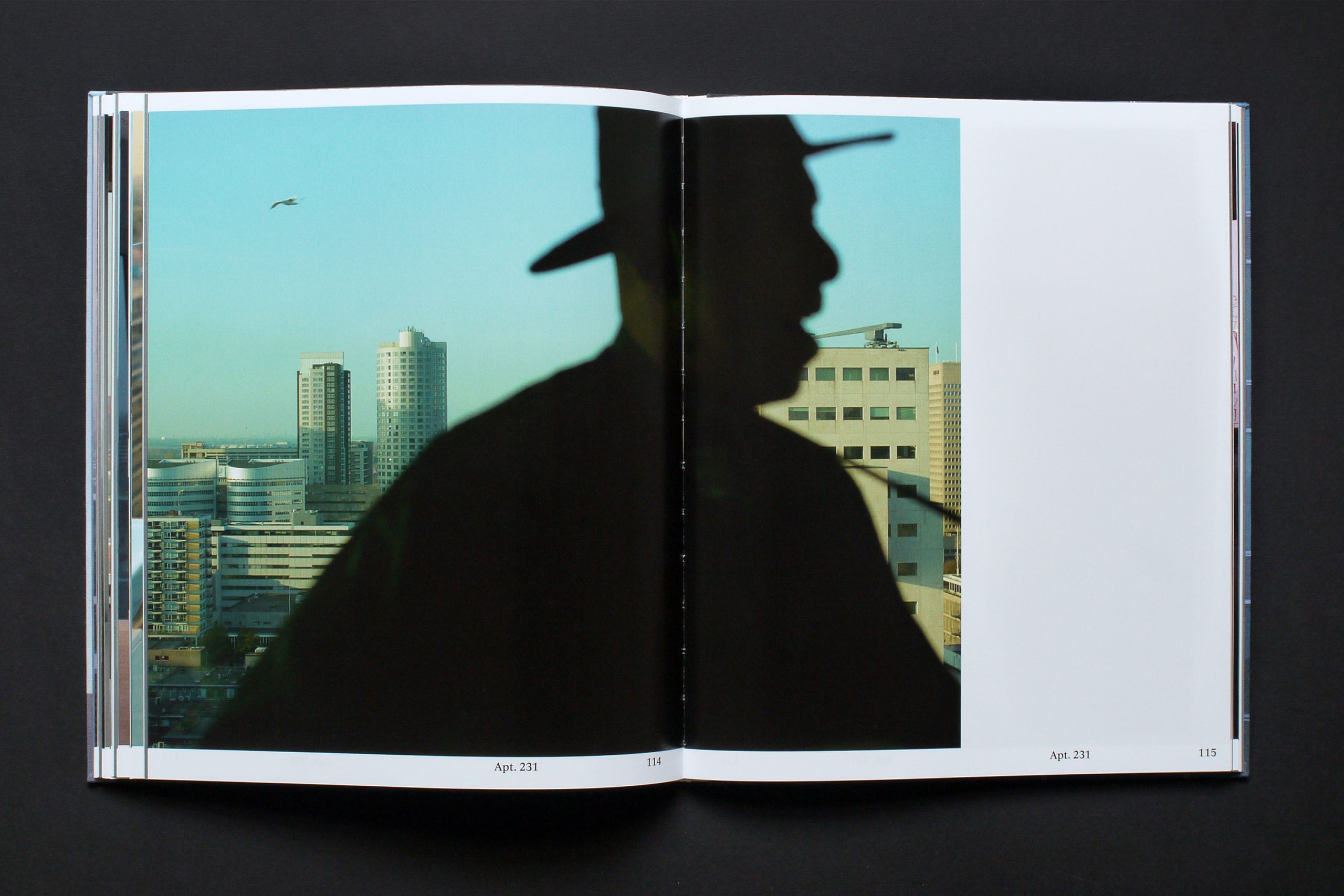 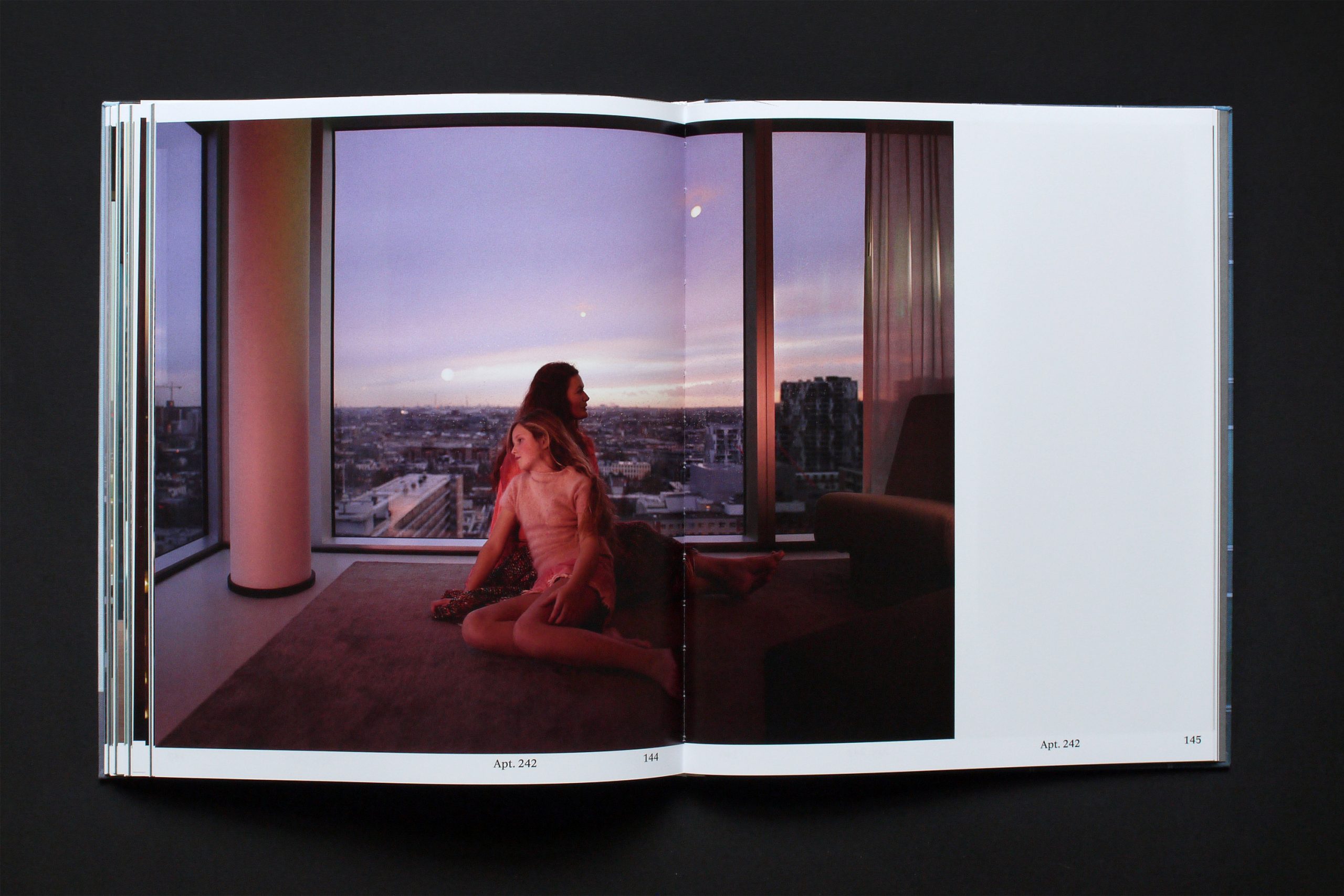 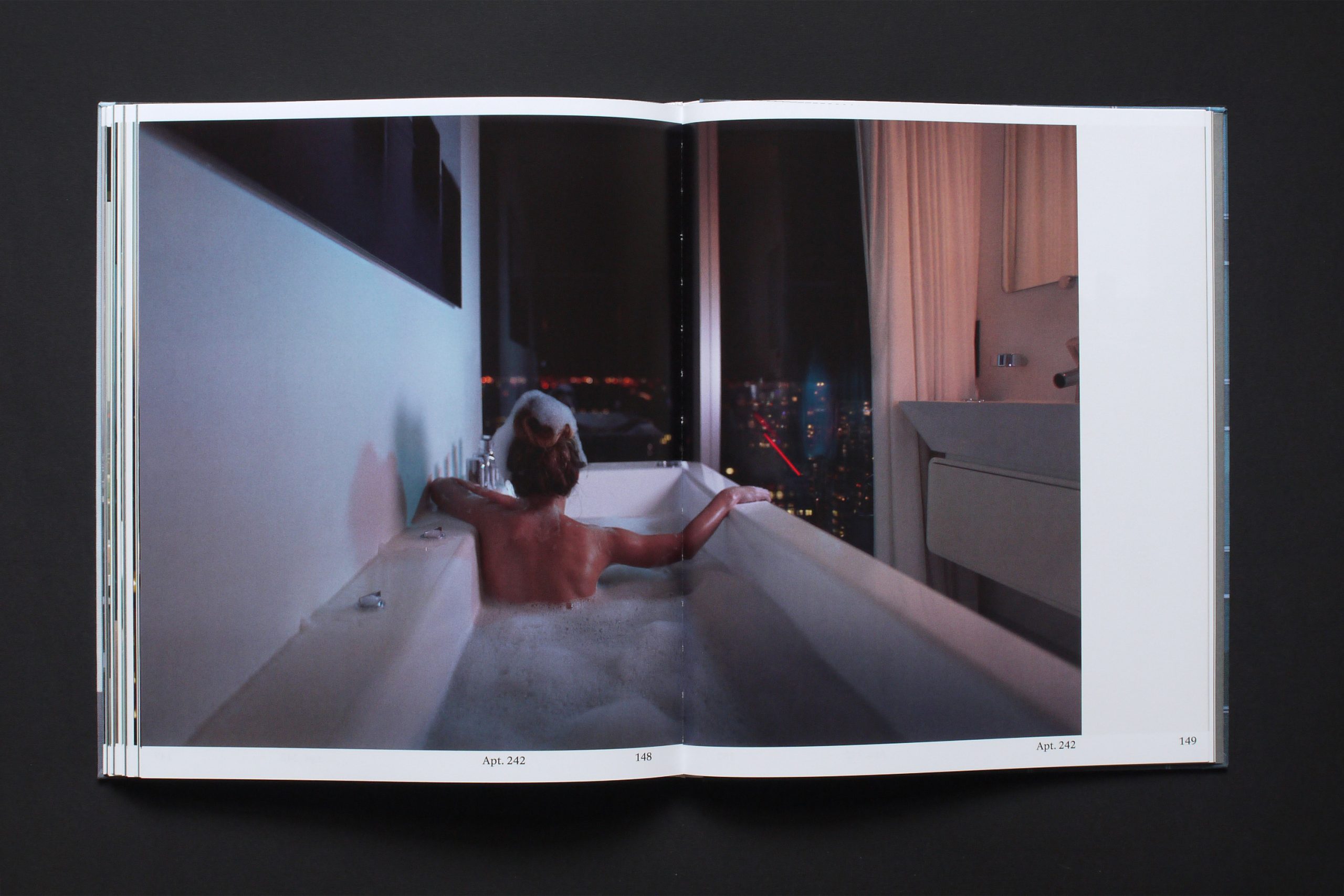 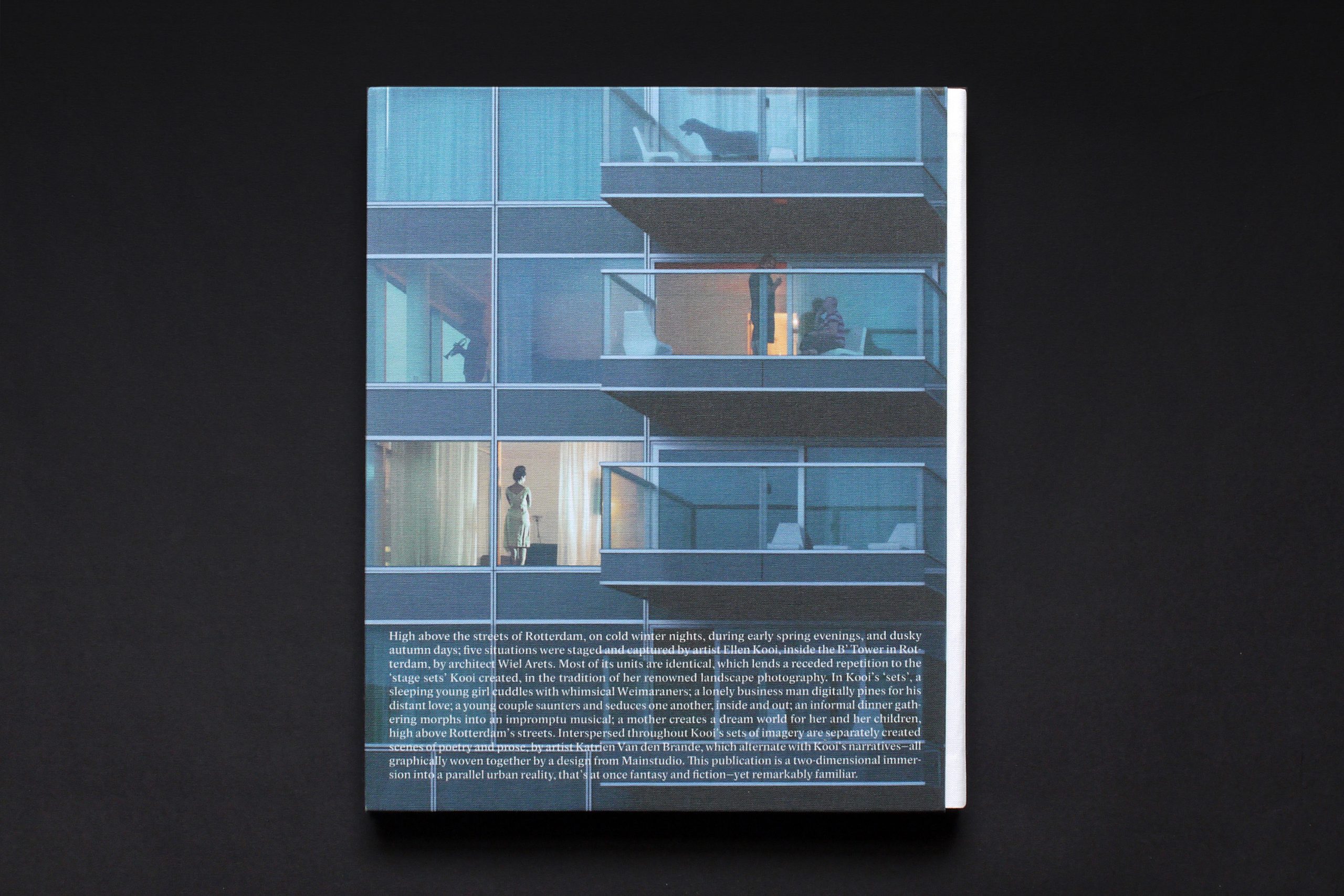 This highly scripted book is a collaboration between an architect, artist, writer, editor, and designer–set within a nearly all-glass housing tower in the center of Rotterdam. It is a documentation of a series of fourteen fictitious guests, who all inhabit the tower; some of guests’ experiences are portrayed in words, with others relayed in custom-comissioned imagery. Much influencing the book’s production, was the 1967 film Playtime–considered the masterpiece of French director Jacques Tati. The film tells the tale of a mezmerized-American in a Paris of-the-near-future, and a preoccupied Frenchman, whose paths crisscross in the capital. There are six sequences in that film, one of which is ‘The Apartments’, where identical cubicles of housing can be seen from the street, each with floor to ceiling windows. This ‘standardization’ of life was extracted from the film, and used as the anchoring idea for this book’s genesis, and its division of surrealist text and ethereal imagery.

Ellen Kooi is the artist whose imagery composes the majority of the book’s original content. Her photographic work explores the boundaries between humans and nature, and is nearly always set within vast landscapes that surround the Dutch city of Haarlem–which is famous for its landscape painters active during the seventeenth century. This tension between setting and inhabitant, is often the central theme flowing through her work, and the reason she that was chosen as the book’s featured artist. This is the first book Kooi has worked on, in collaboration with a writer and architect, and the first to see her work set against contemporary architecture as both a backdrop and subject in itself. Katrine Van der Brande is a stage writer, who was chosen for her background in scenography; her tower ‘guests’, nine in total, bookend each of the five sets of imagery by Kooi. In essence, each of the ‘textual’ guests’ experience is surreal; the ‘visual’ stage-sets created for the guests as envisioned by Kooi, realist in their nature. Neither are interrelated, except for the communal setting of the repetitive, all-glass, tower.

The cover was designed to directly reference Tati’s Playtime, and features an image by Kooi, showing the tower’s elevation, straight-on, combining the characters in her series of images. Its image, therefore, has no perspective; each of the four floors, is occupied by the actors who inhabit Kooi’s five ‘scenes’ photographed in the tower. It is also, the only image in the book combining the separate ‘visual’ experience of Kooi’s inhabitants. The back and front cover image is printed in matte cloth, with the two connected by a separate, white cloth-bound spine. Further recalling the division of Playtime; the book’s design sees textual and visual content separated by paper type. The former is inversely printed on black paper, with silver ink; the latter on glossy paper, with the images always bound by white at the top and bottom, with images often continuing onto subsequent spreads. Dates and apartment numbers give an indication as to the time of year and within which floor, the visual scenarios by Kooi were captured. At the book’s rear, all images are indexed, in the same manner of film slides resting atop a lightbox.