Most of us live in cities. Even if a tiny part of us yearns for the country, it’s hard to deny the excitement of town. Every issue we ask one person–clearly in love with their city–to tell us what makes it so special. Through their eyes, we can take a fresh look at where we live too.

How long have you lived in the city?
I arrived in Amsterdam during the height of summer 2008. I fell in love with the city instantly.

What drew you to Amsterdam?
After studying architecture at the University of Cincinnati’s DAAP, I moved here to write and design for the architecture magazines Frame and Mark.

Where are you from originally?
Cincinnati is my hometown. In a way, Cincinnati’s buildings echo Amsterdam’s, both being so clearly rooted in brick. Perhaps that’s why I feel so at home here; bricks are a comforting reminder of childhood.

What lifts your spirits?
This city is very much alive, and my spirits are lifted when I feel connected to its zeitgeist. It excites me in ways that are beyond words. Boats float down canals, bicycles roll up and over wrought-iron bridges, and rarely are its citizens in a rush. It’s a festive, jovial city basking in the pleasures of modern continental life.

What is the light like?
Amsterdam’s weather reaches its most inviting in autumn, which is when the most striking sunsets occur. The clouds often hang so low that it seems I could reach out and touch them!

What keeps you in the city now?
After I learned to navigate the city’s residents–who are sometimes reluctant to open up–I experienced that Amsterdam will throw open its arms to anyone. If you speak Dutch, the city will put out an even bigger welcome mat. It’s a charming city, and its streets sing with a disciplined yet carefree outlook on life.

What excites you on a daily basis?
Amsterdam continues to reveal itself in unexpected ways. This city is full of secret places and spaces known only to me–or so I tell myself! I’ll often stumble upon another previously unknown side street, enabling me to uncover another hidden gem.

Are there things that drain you?
Too many rainy days in a row make my soul pine for sunlight. Lack of sun drains me.

What do you long for most if you’ve been away?
After traveling, one of the first things I do is go for a destination-less cycle through the city. Tell us about the colors of your city Amsterdam is full of earthy burnt umber, standing alongside vibrant and luscious greens of all shades. Ribbons of pink, blue, golden yellow, and cream stream across Amsterdam’s sky at sunset.

What’s your favorite way to get about the city?
My trusty bike is always near my side, ready to take me anywhere and nowhere.

What would surprise a newcomer to your city?
A newcomer to Amsterdam would be shocked at how many times people say the word ‘lekker’ (‘luscious’ or ‘tasty’). It’s acceptable in almost any situation. And the bikes, yes the bikes–there are so many!

If you could change one thing, what would it be?
Nothing in Amsterdam needs to be changed. The quality of life here is superb.

What are your favorite places to gather with friends?
Any one of the city’s magical parks. Most are landscaped in the English style, so are an escape within themselves.

What’s the best time of day to eat out in your city and where do you like to go?
Café Letting on Prinsenstraat has Amsterdam’s best breakfasts–there, the secret’s out! Their pancakes are perfectly poured, and their cappuccino has the option of soya milk, which is a rarity in Amsterdam.

Where do you find your guilty pleasures?
Many of my most contemplative moments occur while tending the tiny garden of flower pots on my terrace. They keep me connected to the seasons, and it brings me immense joy to see my lavender return each year.

Do you like people watching?
I love to be alone and the biggest reason for that is to find a bench, sit, wait, and watch the world go by.

Do you exercise outdoors?
I am an avid morning runner and will be running this year’s marathon in Amsterdam. Running enlivens me, wakes me up, and prepares me for the day ahead.

What games do you play as you go about everyday life?
Whenever I have the chance, I make sure I run or cycle past the flamingos outside Artis, Amsterdam’s zoo. Some days they’re quiet, and others not but they’re always a welcome sight.

What types of shops do you most like to visit?
Second-hand book shops are my favorite place to pass the day in Amsterdam. Tucked within the city’s tiny streets, some have seen better days while others thrive with a constant chatter of casual conversation.

Where would you like to live if you could not live here?
If I were to live anywhere else, it would be San Francisco. That city also sweeps you in, but in a very non-fairytale way. Every continent has its charms. 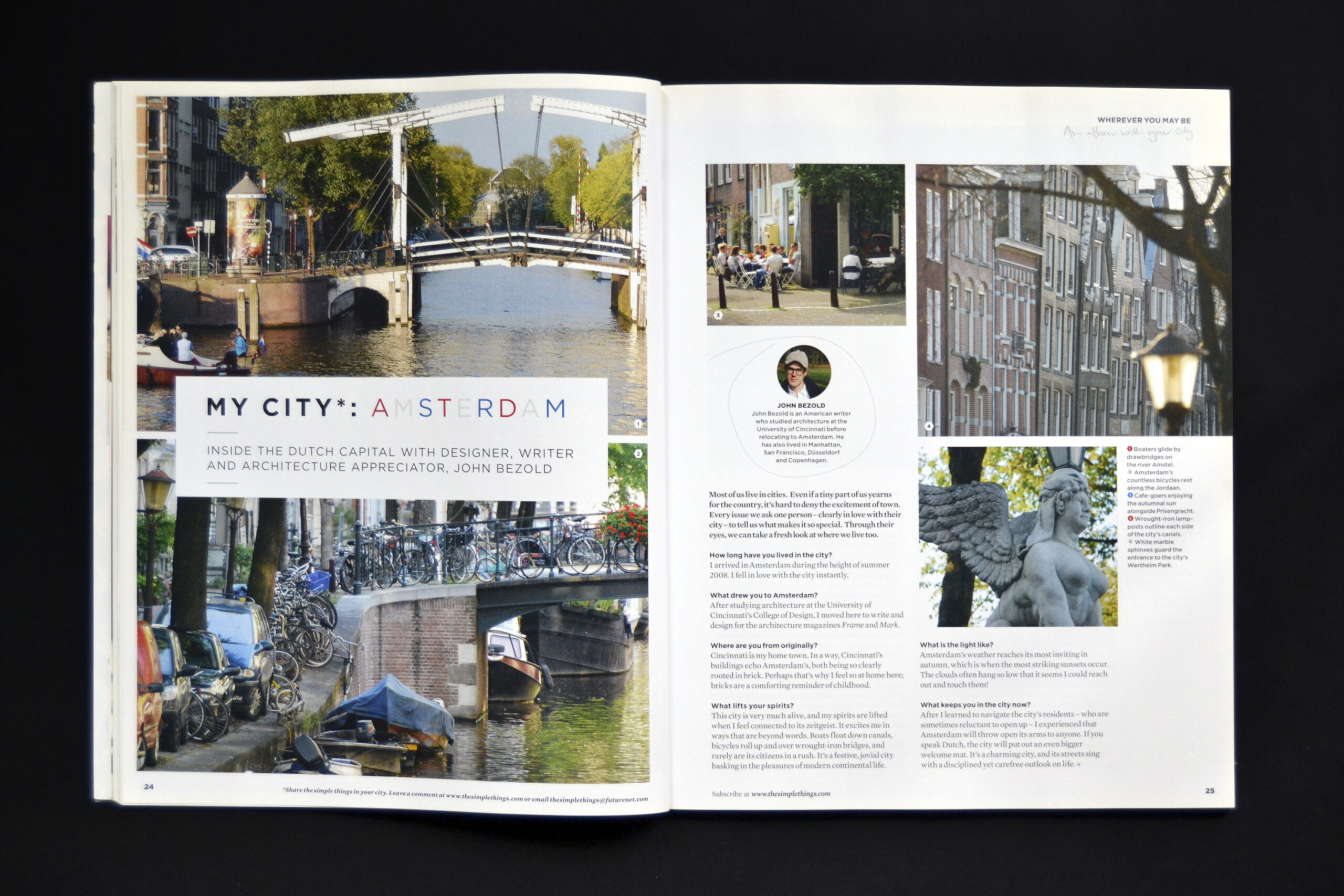 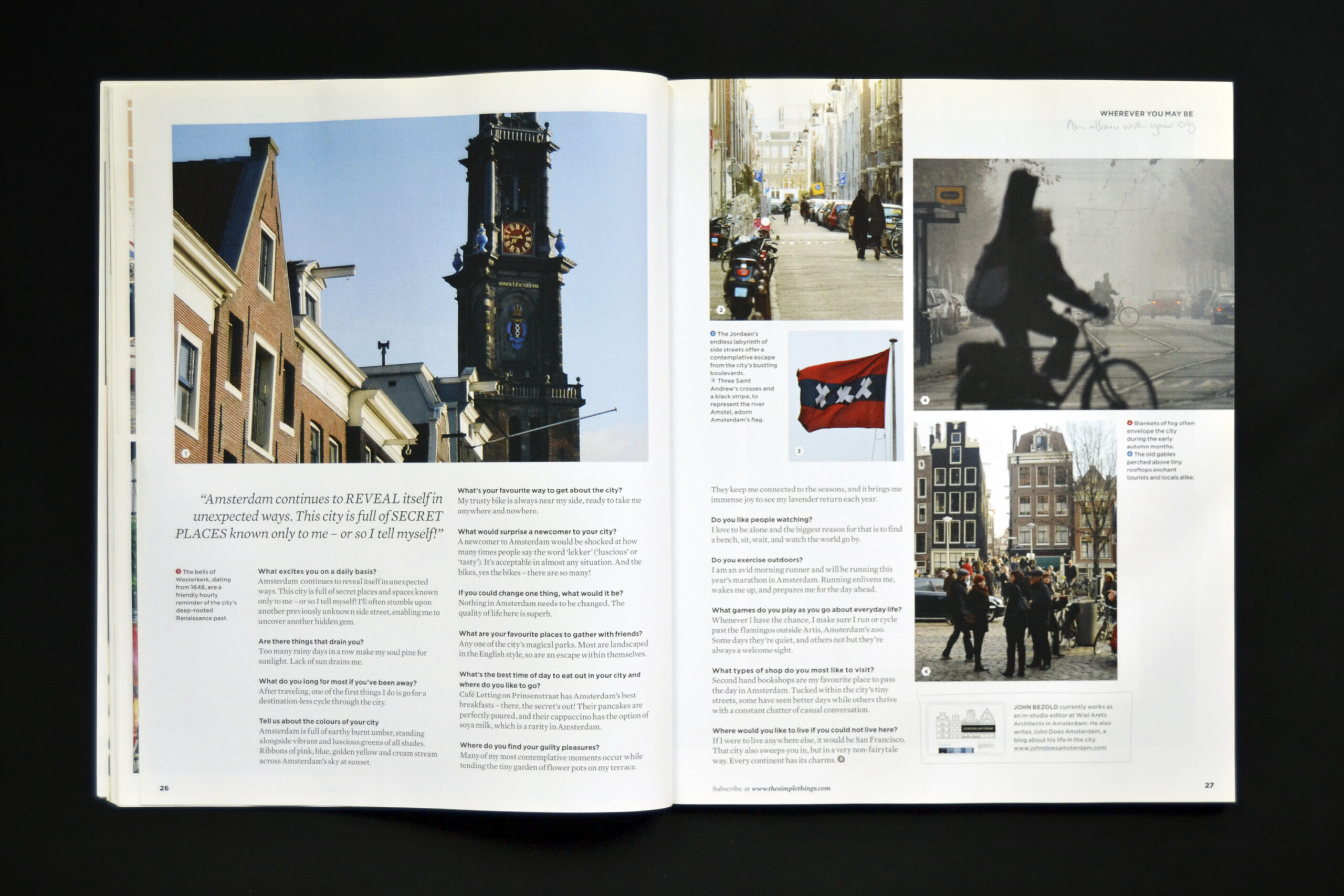