Located in Marbella, on the Mediterranean coast of Spain, the Jellyfish House’s neighboring buildings block its view onto the nearby sea. Appropriately, it was chosen to cantilever the house’s pool from its roof, so that the beach and sea can always be seen while sunbathing or swimming. The house is organized around two paths of circulation: a ‘fast’ and ‘slow’ set of stairs, which intertwine and traverse the house’s four levels of living. The ‘fast’ stair leads from the exterior directly to the roof; it is enclosed in glass, which physically separates it from the house’s interior, yet it is simultaneously open to the exterior elements, so that sand is not brought into the house when returning from the beach. The ‘slow’ stair–whose long treads and short risers lend it its name–spans the entire length of the house, from ground floor main-entry to roof; it is indoors yet also open to the exterior elements, further amplifying the house’s capacity for ‘interiority’.

The house’s rooftop pool is cantilevered 9 m southwest–toward the Sierra Blanca mountain range in the distance–and weighs nearly 60,000 kg. Equipped with an infinity-edge, its water merges with the sea in the distance. This pool has a glass-bottom floor and a panoramic window at its interior facing edge, both of which are 6 cm thick; the latter allows those in the kitchen to voyeuristically view those swimming, while a third window affords those in the kitchen a glimpse of the living room, whose terrace extends under the cantilevered pool. The searing Spanish sun constantly filters through the pool’s glass wall and floor, creating ripples of iridescent turquoise reflections throughout the entire house. As such, the pool can be seen and experienced from nearly all areas of the house. Integrated within the pool is an underwater bench, which traces its length and also integrates a pool cover, so that it is out of sight when the pool is in use.

Five bedrooms are located throughout the house, with two guest bedrooms situated on the basement level that face outward onto an extensive private terrace for the exclusive use of guests. As the ‘slow’ stair leads from the main entry to the guest bedrooms below, this area of the house is able to function as a separate entity. The kitchen is strung along the southern façade of the house’s first floor, with all secondary appliances built-into an adjacent and perpendicular hallway. The first floor is also the location of the sauna and steam bath. A small service elevator also allows, for instance, food and drink to be brought from the kitchen, or any other floor, up to the rooftop pool and terrace. This roof terrace features an oversized and custom-designed concrete table with an adjoining bench, which is contiguous to an angular chair for reclining while sunbathing.

The house’s structure is composed of poured in place white-concrete, supported by one column at the right-rear edge of its pool, and several smaller columns near the rear-dining terrace. All non-concrete walls were constructed with glazing, which allows sunlight to permeate the house. Multiple bedroom closets, whose obverse face the ground floor hallway, are finished in translucent glazing to compound this sunlight diffusing strategy. Oversized and accordion-like folding panels of translucent glazing adjoin each dining or entertaining space, which, when opened, essentially expands the house’s numerous areas of living by nearly doubling their size.

All of the house’s audio-video equipment–such as its countless Bose speakers–are recessed into its ceilings and walls, which allows them to disappear within their context little noticed. Lighting illuminates all corridors and staircases, as well as underwater within the pool, ensuring the rippling effects of its reflections that shimmer through its glass floor and wall can also be experienced throughout the house at night. Taking full advantage of the ever-present Spanish sun, the Jellyfish House is an avant-garde expression of luxurious living; as most of its façades can be opened, and as its staircases are mainly outdoor, the house’s ever shifting boundaries between inside and outside are curiously blurred. 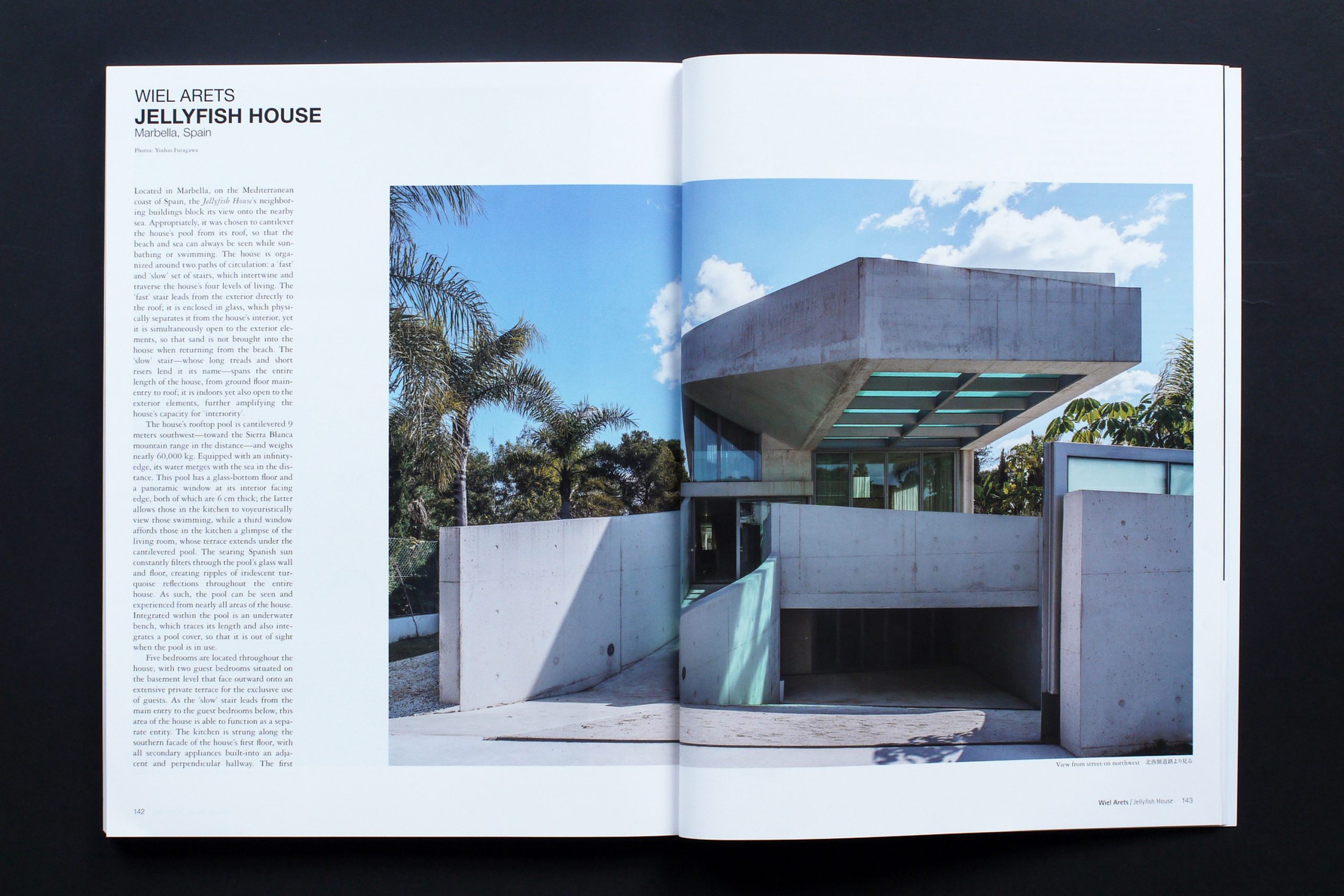